Eat and Drink in Germany

Berlin's dining scene, like its drinking scene, has evolved in leaps and bounds over the past few years, and today, there are a multitude of excellent Berlin restaurants jostling for your belly's attention.

Where once, a limp sandwich and dessicated piece of cheese was held by many Berliners to be the epitome of culinary excellence, the city is now buzzing with choice venues, from esoteric food halls and hipsterish pop-ups flogging gourmet street food to grand, Michelin-starred institutions.

Still, for most of us with modest wallets, the Berliner's love of food on-the-go - the city claims to be the birthplace of the glorious Döner kebab, a traditional Berlin dish - means there's no shortage of fast, hearty and cheap street food options. Attracting many worshippers is the unholy sausage trinity: Currywurst, Bockwurst and Bratwurst, found everywhere from the ubiquitous Imbiss snack-joints to the 'jet-pack'-toting street vendors. But should you feel the need to explore, diversity comes with the flavours of Berlin's ethnic communities that have made the city home over the decades, such as Turkish, Arabic, Vietnamese, Italian and Slavic and eating here can an exciting (or disappointing) experience.

But waves are also being made at the more salubrious end of the scale too, with high-profile openings such as Glass and Les Solistes. Tim Raue has picked up a second Michelin star. Contemporary mores for sustainable and locally sourced produce are flourishing too at places like The Store, Richard and Lokal and while home-grown contenders are beating the best of them, the New York Times' food critic recently described his pastrami-on-rye experience at Mitte's Mogg as an experience 'only a handful of delis in New York can match'.

The last few years have seen the city's flourishing expat community fuelling the rise of hipster hangouts such as the fiendishly-tempting foodstalls at Kreuzberg's Markthalle and the equally eclectic (and delicious) participants at the fortnightly Bite Club. The latter, a riverside party of DJs, beautiful people and food stalls from around the city (and world) dispensing truly droolworthy offerings - brilliantly demonstrates Berlin's ability to assimilate and reflect its energetic, multi-cultural character.

So, for today's visitor, there is no excuse for huddling fearfully fast-food chains bemoaning tepid wurst - exciting things are happening in Germany's kitchens and now is the time to explore! 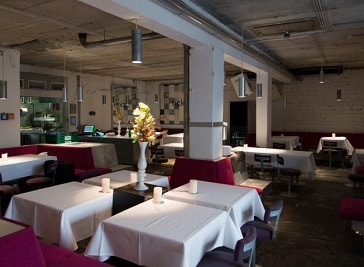 Berlin’s vegetarian scene was sorely lacking when this restaurant opened, hence cheers went up for not only its meatless dishes but the refreshing flair and innovation shown by the kitchen (no pasta! no rice!). The venue’s loft style interior, all low ceilings, exposed brickwork and an open kitchen, is a hit with the clubbing crowd, not least because of the club that used to be downstairs. Be warned, it’s (deliberately) tricky to find so make sure you visit the website to get good directions first.
Read More 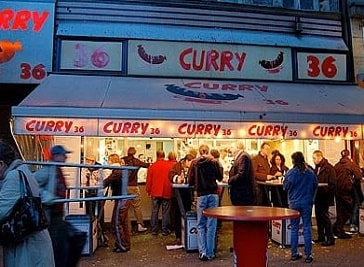 If you want to eat currywurst the Berlin way, order yours here boiled and naked ("ohne darm", without skin), looking a little pale in comparison with the ones in pink skins. The sausage at this particular snack bar is so popular that they've started a range of merchandise sporting their daft logo. Besides the currywurst there's bockwurst, krakauers and several other types of sausage as well as proletarian Berlin specialities such as fried burgers and bouletten (meatballs/patties).
Read More 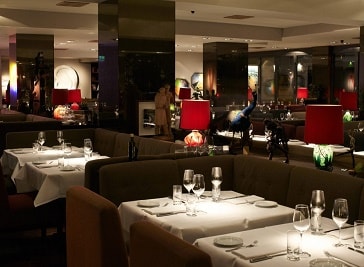 Forget the sleb associations (it’s notoriously popular with politicians and artists), this is simply one of Berlin’s best steakhouses, hands down. Take your pick from perfectly cooked Argentine, Australian, German and French steaks (or sample the exquisitely naughty de Claire oysters or the ravioli if you’re not into beef). The location is great (right on the Spree – try and bag a seat outside in summer), and the interior upmarket and arty.
Read More